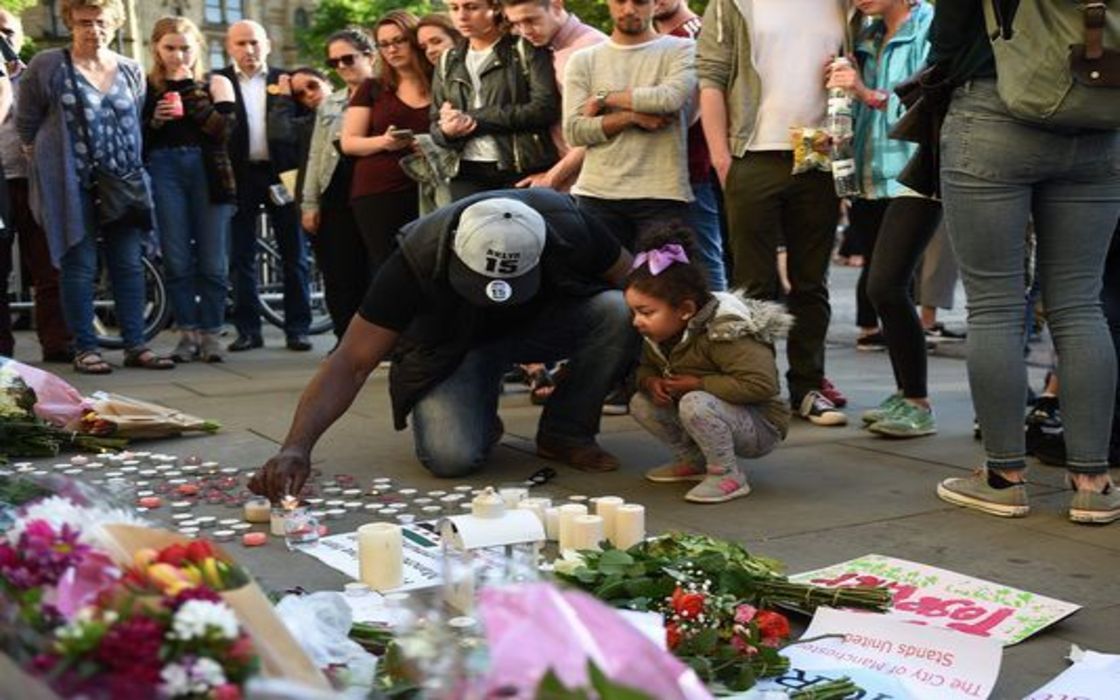 Mourners in Albert Square in Manchester on May 23, 2017, after a vigil for those killed and injured in the May 22 terror attack at the Ariana Grande concert at the Manchester Arena.(Photo: OLI SCARFF, AFP/Getty Images)
Views: 725

The bombing of departing audience from an Ariana Grande concert in Manchester, England, late Monday serves as an alarm bell that protecting public venues in the future will have to focus more on hardening building perimeters, security experts said Tuesday.

That could be a problem just as the summer concert and music festival season is starting. Aside from sports events, live music concerts are the most obvious public gatherings of mass audiences available, at least in the USA.

Major music acts are preparing to take to the road, many of them scheduled to play at sprawling, hard-to-secure arenas. And outdoor music festivals could be even more difficult to protect from harm without creating impossible lines of concert-goers waiting to be checked before getting near a stage.

Already, some bands are either canceling gigs or adjusting their touring plans and beefing up their security details. Wild Things Park, outside of Pittsburgh, announced Tuesday that it's tripling security measures for June 10's show featuring Rick Ross and Lil Uzi Vert, including extra metal detectors and consultation with local law enforcement.

Grande's next scheduled show of her current Dangerous Woman tour was to be Thursday at London's O2 Arena, and she and her team have decided to cancel her European tour dates through June 5..

Meanwhile, it's crucial not to panic, or exaggerate risks or despair that nothing can be done to prevent such murderous attacks at concerts and other mass assemblies, says Brian Levin, a professor at California State University San Bernardino and director of its Center for the Study of Hate and Extremism.

"We have over 30,000 people killed every year (in the USA) in vehicular accidents so you're at far greater risk driving on your way to a venue," says Levin, a former New York police officer who's preparing to take his teen son to a concert next month. "People tend to misjudge their fears and risks in part based on their exposure vicariously to attacks through TV" coverage.

The result could be damaging for the concert industry in general and acts playing venues perceived by the locals as too vulnerable to attack. Don't let terrorists change your entertainment behavior, says Russ Simons, managing partner at facility-management firm Venue Solutions Group.

"If people stop going to concerts, the net result is that our opponents have won — they use fear to change our behavior. It gives them exactly what they want, and I reject that," Simons says.

The irony, Levin and Simons note, is that past terrorist attacks, including in Brussels and in Paris, suggest that suicide bombers may be choosing different tactics because of better security.

Keeping terrorist attackers from getting inside public buildings has improved so much in recent years, attackers are increasingly targeting outside perimeters, especially when thousands of people are trying to leave, as appears to have been the case in Manchester, says Chris Robinette, CEO of Prevent Advisors, a security and counterterrorism advisory firm with clients that include large public assembly spaces.

"A lot of the mechanisms and policies and procedures we have today, such as metal detection, are inwardly focused — protecting inside the venue," Robinette says. Consequently, he says, terrorists have taken up tactics such as vehicle ramming and suicide bombings at entrances to airports and transport stations.

"We need to start reorienting our security and safety procedures, we call it 'expanding perimeters,' to adapt to new threats," Robinette says. "We have to reallocate our focus and energy on the perimeters and peripheries of buildings."

Simons believes the attack on Manchester Arena, the U.K's second-largest, almost certainly had nothing to do with pop princess Grande, whose concert had just ended. More than 20,000 fans, many of them youngsters carrying pink balloons and wearing her trademark bunny ears, were just leaving.

The bomber may have chosen Grande's gig merely as a convenience. Or he may have been attracted by the youth of Grande's typical audience to cause maximum horror: The death toll stands at 22, including 12 children under 16, with more than 50 people injured.

Simons says security professionals can learn from each attack on a venue where mass numbers of people gather.

"We're constantly looking at vulnerabilities and things we can change, and there is a vulnerability as people are departing from a facility," Simons says. "A large number of facilities already have procedures for controlling open plazas and curbs and (exits); for those who don’t have a robust program for that, this incident will be analyzed and resources put in place to strengthen" protection.

John White, president of Protection Management LLC in Canton, Ohio, says the bomber might have been detected before setting off the bomb if there had been such robust security, including more cameras, on the lookout for anyone acting nervous or loitering near "soft targets" such as exits.

"We have to start thinking ahead: If you have 15,000 people coming to an arena, what are we doing to protect them on the way in, when they're in there and on their way out?" he says, including a more "layered" approach to security that combines private and public security resources.

Another security tool that could be helpful: "Vapor wake" dogs. Most people have seen bomb-sniffing dogs at work — they focus on objects and spaces at the direction of handlers. Vapor-wake dogs are trained to sniff out bombs before bombers reach their target, by detecting the vapors of the explosive materials combined with the body heat of the bombers, Robinette says.

Initial indications are that the Manchester bomber traveled via public transport to the arena, located adjacent to a major transport station.

Aside from technology and canine prowess, ordinary people — say, concertgoers — should become more "situationally aware," says Levin. "Take control of where you are going: Know where exits are, know how to get from a chokepoint to a place where it's not as densely packed."

"It's the new order: Everyone has to be very vigilant," says McPherson. "A lot of people say they don't want to give up their constitutional rights but we already have given up a ton of rights because of terrorists. I feel better at a concert if I'm patted down — it's a pain in the butt and it slows down lines and tickets are more expensive, but I feel safer.

"No one likes this, but if it makes us safer, then we gotta do it."