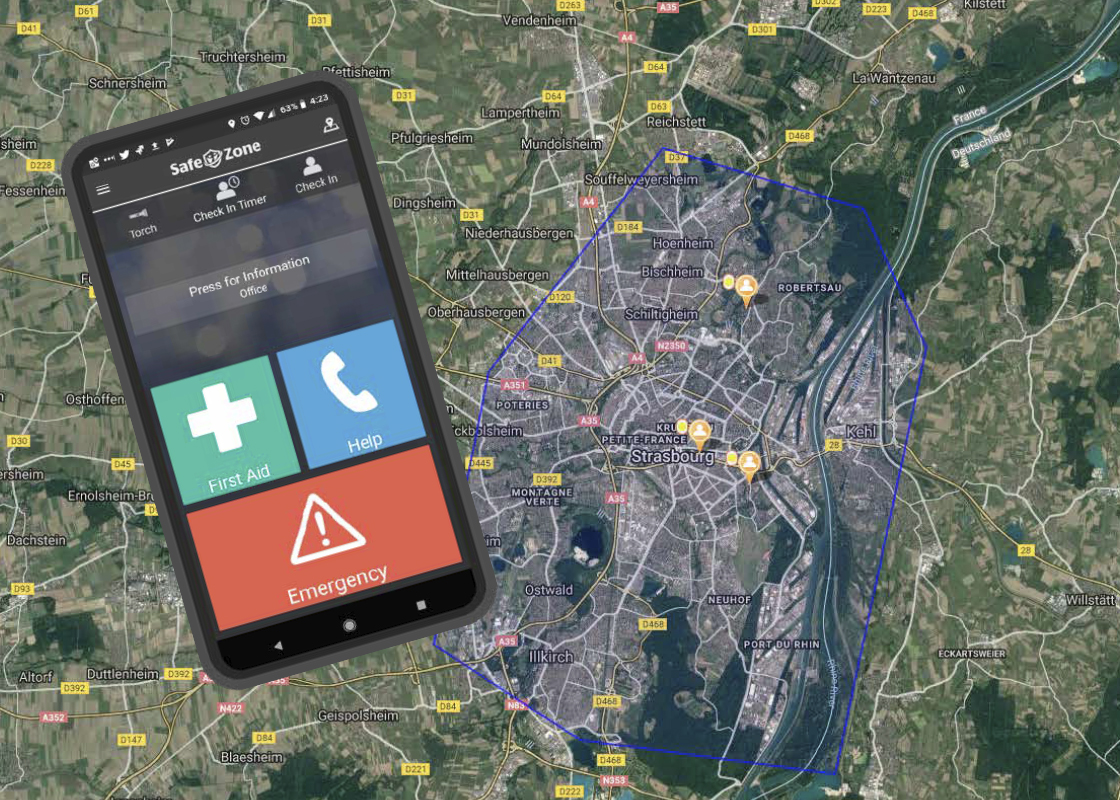 Security control rooms around the world are seeing an uplift in their capabilities and their importance.

They are using the latest geo-location and visualisation tools to increase their command and control capabilities without the expense and complexity of traditional PSIM architecture that effectively just monitors systems, not people.

The actions of one security team last month during the deadly terrorist rampage in Strasbourg city in France illustrate how these new tools have the potential to make a very real difference.

On 11 December 2018, suspected Islamic extremist Chérif Chekatt attacked civilians in the city's busy Christmas market with a revolver and a knife, killing five and wounding 11 before fleeing in a taxi.

Three students from Edinburgh’s Heriot-Watt University who were on university placement in Strasbourg discovered just how powerful security technology can be during the event.

Shortly after 8pm that day they received a notification on their SafeZone app warning them to keep off the streets and to stay in their current secure location.

That warning and subsequent updates were sent to them by the university’s SafeGuarding team almost 900 miles away, where the team was monitoring breaking news of the shooting incident. Checking their SafeZone system, the officers on duty had quickly discovered that three of the university’s students were within a mile of the incident locus.

From the moment when the news first broke, to the moment when all the students had been located and advised to remain in their secured buildings, only 30 minutes had elapsed. All this while, a full scale security operation was underway: the European Parliament building was going into lockdown and the police were using Twitter to relay information to the public.

The technology they’re all using is developed by CriticalArc and it is now deployed in over 80 countries.
Creating Safe Zones In 80 Countries
The technology works by letting control room operators pinpoint the precise locations of individuals: staff, students, service users, in fact any user who is ‘checked-in’ using a simple app on his smartphone.

This service makes it easy for users to communicate directly with security operators. Users can use the mobile app to call for help, ask for advice and report suspicious activity.

The solution also allows security teams to send out alerts and safety instructions to groups or individuals. The teams can also monitor activity patterns and coordinate resources. For example, using the solution, teams are able to keep track of where registered first aiders are and see exactly how team members are deployed, minute by minute.

The technology operates globally and in many ways universities and hospitals are the ideal proving ground for it because of their diverse operations and nature of their challenges.

For example, students and teaching staff frequently travel to study and work. With the solution, they can be ‘geo-fenced’ - protected and communicated with - wherever they go, anywhere around the world where they can get a signal on their phone.

SafeZone users have reported good results. There are many reports of how it has helped security officers deal with medical emergencies, how it reduced criminality, how it protected during terrorist incidents, how it improved customer service day-to-day and how it resolved problems halfway around the world.

A student caught up in flooding in southern India was successfully evacuated to safety through the app. An employee was reached by first aiders moments after suffering a heart attack. A user was given advice and reassurance in South America when she missed her flight. A sexual assault was prevented by timely intervention.

“Security staff have renewed importance as first responders, providers of customer care and ambassadors for the brand.”

“Security teams are finding that their new ability to communicate directly with individual service users is giving them a new, more important role to play,” said Chalmers-Stevens.

What’s so different about SafeZone is that it’s not just the technology that’s transformative, but the way people are using it, argued Chalmers-Stevens,

“Each time we put this in the hands of a safety or security manager, new applications and benefits become apparent. It’s letting them be more forward-looking. So with each system that goes live, we recognise additional applications for the technology.”

A Network Of Safe Zones

CriticalArc envisions a global community made up of SafeZone users working closely together, linking their systems in a shared service model for on-the-ground support for each other’s users.

With police and ambulance crews often over-stretched, this model has the potential to allow skilled security officers to fill the void during the first vital minutes of an emergency incident.

If somebody has particular medical needs for example, and he is moved from one protected zone to another, information of his medical needs will be automatically shared with the first-responding security team that is closest (subject to the user’s consent), allowing the right help to be dispensed more quickly.

The same model is also being developed internationally, with SafeZone operators collaborating across borders to provide support for service users who are travelling abroad.

In February 2019, over a 100 senior executives and security leaders from around the world will gather in the UK for a landmark user conference. These men and women are responsible for thousands of protected locations - including campuses and city centre sites – each location with thousands of registered users and each facing similar challenges, ranging from handling routine calls for assistance to planning for major emergencies.